​James Hunley, the Ambassador of the Classic Guitar

James Hunley has performed  in well received concerts throughout the USA ,  South Pacific, Mexico, and Western Europe. Presently living in Los Angeles California, Mr. He has hosted many television programs that both instruct and communicate the internal dialogue of acoustic music. His recordings have been heard throughout the North American Continent.
The Music video from Lasting Impressions, La Catedral, (shot in Big Sur, CA),
has been broadcast on PBS, A&E and The Arts Channel in the U.S. It has been seen internationally on Arts.  His second solo C.D., is now in its second pressing.
In regard to his live performances, music critic Robert Masulla called his playing
"Beautifully phrased, amazingly subtle and incredibly sure." However, James believes that the emotional response is the most important feedback
for him as an artist. -"nothing greater in life than to touch someone's soul through your music". James' concerts feature rich program notes that convey the romance and wonderful history that spans 700 years of music. 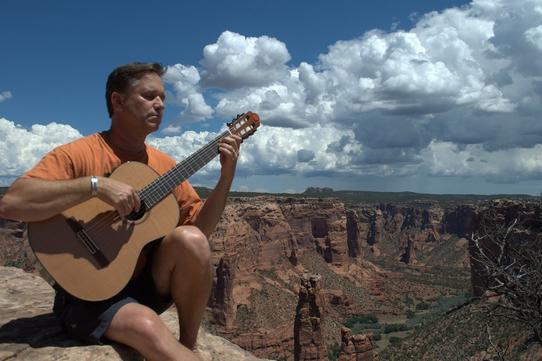