Marc Teicholz was awarded first prize at the 1989 International Guitar Foundation of America Competition, the largest, most prestigious contest of its kind in the United States. He was also a prize winner at the 1991 New York East-West Artists CompetitionDescribed by Gramophone as “arguably the best of the new young guitarists to have emerged,” and by Soundboard magazine as “among the best we have ever heard,” Teicholz’s performances throughout the world include tours of the United States, Canada, Russia, Poland, Switzerland, Southeast Asia, New Zealand and Fiji. His recitals and master classes have received critical acclaim, and he has been featured in concert with orchestras in Spain, Portugal, California and Hawaii.

He has also had new works written specially for him. Most recently, Teicholz debuted Clarice Assad’s Concerto for Guitar, O Saci-Pererê, at the Biasini Festival in San Francisco. Teicholz tours the United States extensively with The Festival of Four. He is featured on the pilot soundtrack for George Lucas’ Young Indiana Jones, and has recorded solo CDs for Naxos, Sugo, Menus and Music, and most recently, Guitar Salon International. His latest solo disc, Valseana, presents works performed on historic guitars of the period of each musical selection.  On Delos records, he has recently released “Open your Heart” with soprano Laura Claycomb, featuring mixed 19th and 20th century composers.

For Naxos, Marc Teicholz has made his mark with two collections of Sor’s music already committed to disc. In a show of his versatility, he has also recorded the fifth volume of the collected works for guitar by the 19th Century French virtuoso guitarist and composer Napoleon Coste.Type your paragraph here. 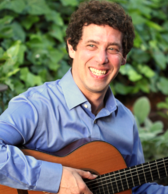