Russian-born and Israeli-raised guitarist Yuri Liberzon ranks among today’s foremost classical guitarists in the United States and the world. His playing has been described as “Transcendent technical prowess at the service of gracious musicality. He is a natural born guitarist”. Washington D.C. Guitar Society wrote: “Mr. Liberzon was terrific. World-class mental acrobatics. Very pleasing results.”

Mr. Liberzon has been recognized for his technical ability and musicality at both international competitions and non-profit organizations. In 1996 and 1997 he won top prizes at the Ariane Yerushalmi Eldor Classical Guitar Competition of the Jerusalem Academy of Music and remains the youngest prizewinner in its history. Since 1996, he has been a frequent recipient of scholarships from the America-Israel Cultural Foundation, an organization with the reputation of only nurturing the best in Israeli culture.

His skills have also earned special recognition by the USCIS; Mr. Liberzon was granted Alien of Extraordinary Ability United States Permanent Residency based on his achievements in the music field.

Both Yale University School of Music and Peabody Conservatory of the Johns Hopkins University awarded Mr. Liberzon full scholarships to study with two of the world’s leading guitar figures: Manuel Barrueco and Benjamin Verdery. Yuri went on to successfully complete his Graduate Performance Diploma and Bachelor’s degree from Peabody and finally a Master’s degree from Yale.

Not only has Mr. Liberzon been recognized for live performances, but also his arrangements for guitar; his Domenico Scarlatti and J.S. Bach arrangements have both been published in SoundBoard magazine, the official quarterly magazine of the Guitar Foundation of America.

In addition to arrangements and transcriptions, his expertise has been called on to judge competitions in the United States, most notably the Beatty Music Competition for the Classical Guitar in Washington D.C.

He is currently based in the San Francisco Bay Area of California. 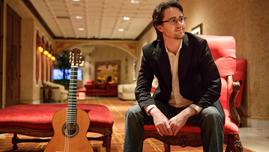